Spent the day with Marie on saturday, we chose to visit the British Museum because it was free and lots of good stuff in there, i have to admit i am not a huge museum fan, i like to go to places where i really can do something or get my hands on something, however i was more than impressed by it.

it was a huge building and from the outside you perhaps dont think its as big as it is when you get on the inside, there are so many floors and wings and sections, we actually got lost a few times! we started at 10 and gave up with sore feet at around 15:30 we definitely didnt get to see the whole museum – its just too vast i think to see it all in one day. we got to see the bulk of it though, some interesting observations were made, mostly that there just seemed to be a running theme of pots throughout the museum, so we figured that historians and archeologists must have been hungry people! some of the highlights of the visit were rather morbid, the Lindow man rather freaked me out how they just had this dead body on display preserved in all his glory (or lack of) having died sometime near the 30-40BC range, the egyption mummies were a good highlight, and i think that is the same for most other visitors to the museum as it was by far the most busy section of the day, i find it odd that man has this strange obsession with dead people but hey. 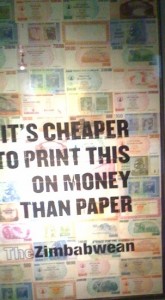 there were a wide range of exhibits and rooms but the one that caught my eye and was the most memorable was this small room that was about africa and its colonisation and independance over the last 150-200 years i saw some artwork which really struck me, it was a print where someone had printed a slogan on a mosaic of Zimbabwe currency (in the Hyper inflation stage) with the words, “Its cheaper to print this on money than paper” sadly my only photo of the day doesnt do it justice but none the less it is here for all its glory.